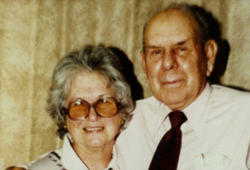 The Carl T. Benke Family Memorial Fund at the Catholic Foundation was established in 1994 by Lahoma "Granny" Benke in memory of her late husband and their family. Carl and Lahoma were Catholic farmers who lived four miles south of Lawton. Both attended Catholic school at least part of the time and educated all 11 of their children at the Catholic school in Lawton. Not wanting to create a private foundation to accomplish their charitable work, Mrs. Benke and her children saw the value in creating a fund at the Catholic Foundation. The Benke Family has long been involved with charitable works and wanted to see God's work funded even after the immediate family passed away. Their Donor Advised Fund has truly been an example of Catholic stewardship through scholarships as well as annual donations to their parish and Catholic school in Lawton, religious orders and community organizations.